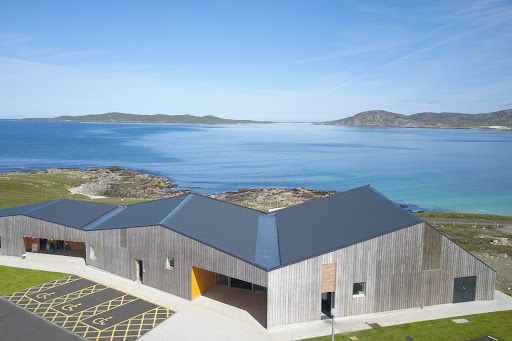 Talla na Mara is a brand new Community Enterprise Centre overlooking the golden sands of Niseaboist Beach on the Isle of Harris. Talla na Mara is Gaelic for the “Centre by the sea” and is owned and managed by the West Harris Trust on behalf of the local community.

The Art of Weaving

Iorram - Documentary Country of Origin: United Kingdom Year Released: 2021 Run time: 1hr 38min Language: Scottish Gaelic (with English subtitles) Director: Alastair Cole Classification: PG Description: Iorram is a lyrical portrait of the Gaelic-speaking fishing community in Scotland’s Outer Hebrides, and its intimate relationship with the sea. This first-ever theatrical documentary entirely in Scottish Gaelic blends archive recordings of voices, stories and songs from the past with visuals of island life today and a contemporary folk score, to take the audience on an immersive and moving journey into the heart of an ancient community struggling to preserve its identity in the modern globalized world. At the heart of the film is an extraordinary trove of sound archive, recorded by pioneering Scottish ethnographers in the mid-20th century, who visited the Outer Hebrides to capture the hardship and romance of life lived in precarious balance with the sea, spoken in a language shaped by the waves. These newly restored recordings preserve an oral history of practical lore and mystical legends passed down through generations of Gaelic speakers, but now on the brink of fading away forever. Director Alastair Cole places these voices from the past alongside stunning visual imagery of the daily working rhythm of the islands today, on land and on water, shot over three years. The tough realities of fishing and gutting in all weathers and seasons co-exist alongside superstitions and visions of mermaids, faerie folk and mysterious vanishing islands. A score by award-winning folk musician Aidan O’Rourke weaves together sound and vision in an emotional and cinematic narrative of toil, laughter and loss. The sea has always sustained this community, while also holding the power to ravage the lives of the families who rely upon it. The film offers whispers and shadows of people and tragic events long since gone, yet whose memory continues to shape life on the islands today. As Scotland and the UK enter a new future, this provides a reminder that the threads of history and identity at this furthest edge of the British Isles are woven, unmistakably, in the lyrical power of the Gaelic language. Screenings: An Lanntair Arts Centre, Isle of Lewis: Saturday the 24th of July at 5:30pm. Taigh Dhonnchaidh, Isle of Lewis: (Outdoor Screen): Tuesday the 20th of July at 2pm. Grinneabhat Community Room, Isle of Lewis: Friday the 23rd of July at 7pm. Talla Na Mara, Isle of Harris: Tuesday the 20th of July at 1pm. Carinish Village Hall, North Uist: Saturday the 24th of July at 5:30pm. Northbay Hall, Barra: Saturday the 24th of July at 11am.

Documentary Country of Origin: United States Year Released: 2019 Run Time: 98min Language: English Director: Leila Conners Classification: HIFF: PG Featuring: Leonardo DiCaprio (Voice) Description: Can we reverse climate change? Ice on Fire explores the many ways we reduce carbon inputs to the atmosphere and, more important, how to "draw" carbon down, bringing CO2 out of the atmosphere and thus paving the way for global temperatures to go down. Reversing climate change is urgent, given that the world passed 400 parts per million CO2 in the atmosphere resulting in climate instability across the globe. We have heard the predictions but now climate related events are a daily reality - summer 2018 was the hottest on record, storms are stronger, droughts are longer, the arctic ice is thin or non-existent and antarctica is melting faster than predicted. Through visiting visionaries and scientists young and old, the film explores the deep hope that we can turn away from the brink. And, just as we figure out drawdown, we face an added complexity, the release of methane, a powerful greenhouse gas in the arctic, that is now entering the atmsphere. As the film says: "Is it game over? Or is it game on? As we have at hand, the ability, the capacity, and solutions that can reverse global warming...not mitigate, not reduce, not stabilize, but reverse.' Screenings: An Lanntair Arts Centre, Isle of Lewis: Tuesday the 20th of July at 8pm. Talla Na Mara, Isle of Harris: Tuesday the 20th of July at 4pm. Northbay Hall, Barra: Saturday the 24th of July at 5:30pm.

Documentary Country of Origin: United States Year Released: 2019 Run time: 13min Language: English Director: Greg Balkin Description: The Gwich'in have been fighting oil and gas development to protect way of life and caribou in the Arctic National Wildlife Refuge for over 40 years. In 2017, people from across the country came together to support Indigenous groups as they fought for their land around Southern Utah. If we showed our support for the five tribes in Utah, shouldn't we be able to care about the Gwich'in as well? Screenings: An Lanntair Arts Centre, Isle of Lewis: Friday the 23rd of July at 8pm (accompanying Limbo feature). Kinloch Community Hub, Isle of Lewis: Wednesday the 21st of July at 7:30pm (accompanying Rams feature). Talla Na Mara, Isle of Harris: Tuesday the 20th of July at 7pm (accompanying Nomadland feature). Carinish Village Hall, North Uist: Friday the 23rd of July at 8pm (accompanying Kiss The Ground feature).